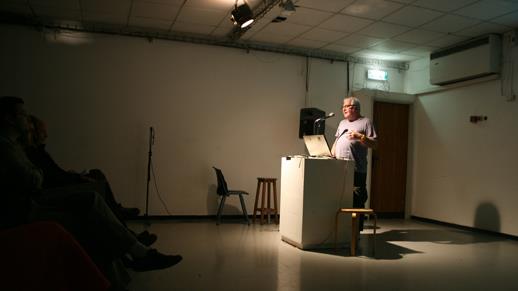 This conference is the first in a series of three that will accompany the exhibition, “Evil to the Core.” The exhibition and conferences wish to catalyze a discussion on docility and obedience to authority, conformism, social responsibility, disobedience, and non-conformism in general, and in Israeli society specifically.

The conference’s starting point is the experiments in social psychology conducted in the 1960s and 70s in the United States: Stanley Milgram’s “Obedience” experiment and Philip Zimbardo’s “Stanford Prison Experiment,” both investigated the measure of obedience to authority in cases where participants were instructed to implement actions contrary to their principles and conscience. Three major methods run through them: simulation, experiment, and reconstruction or reenactment, which may be regarded as methods shaping the reality of the present.

The Conference Program:
Dr. Rony Berger–  Social Experiments and their Influence on Social Study.
Dr. Bergeris a licensed clinical psychologist and family and child therapist, is the Director of Community Services at NATAL. He received his doctorate in Clinical Psychology from the Florida Institute of Technology. Dr. Berger was the head of the Psychosomatic Medicine Program at Hebrew University, a researcher at the Harry Truman Center for the Advancement of Peace and a visiting Professor at Al Quds University Medical School. He is currently the head of the psycho-social desk and a board member of “Psychology without Borders”.  Dr. Berger worked with PTSD victims all over the world, including the Oklahoma City bombing, the 2004 tsunami, 9/11, Hurricane Katrina and more.

Dickinsonis a British artist specialising in recreations of historical incidents or events. His works explore ideas pertaining to belief and social control, as can be seen  in the current exhibition, ’Evil to the Core’, where Dickinson presents The Milgram Re-enactment 2002 (in collaboration with Graeme Edler and Steve Rushton) consisting of an installation reconstructing Stanley Milgram’s laboratory in detail, alongside a video reenacting the experiment with actors. The work offers viewers sensory confrontation by virtue of the physical presence in the laboratory, which calls to mind a return to a crime scene to study the evidence and experience it up close. By means of the reconstruction, the artist generates a system of simulation as part of which the viewer can participate in the experience.

Dr. Amira Dor – The Establishing Simulation: the physiology that allowed the expulsion of 2005.

Dr. Amira Dor is a senior clinical and medical psychologist, has a private practice alongside her work at educational and physiological services in Kdumim. In 2005 she worked in Netsarim in the framework of the movement “Adama, Admati”  (Land, My Land). Two years later she joined a team that studies the mental preparations of the Israeli army. The team includes volunteer professionals from the fields of  physiology, education, law and sociology. It investigates the implications of the methods used by army and police forces during the evacuation of Gaza. During the investigation, it was revealed that the principal system that guided the phycologists in designing the mental preparation of the soldiers, was taken from the studies of Stanley Milgram.

Avigdor Feldman – “I saw the two hoofs of a horse detached from the ground” – Filming in Crime Scenes.

Feldman is a lawyer dealing with criminal, human rights and political cases. He defended Marcus Klinberg, Mordechay Vanunu and Tali Fachima. Feldman established the  Center for Litigation at the The Association for Civil Rights in Israel (ACRI) and is one of the fouders of “B’Tselem”. His efforts have lead to a retrial for the defendants in the Dani Kats murder in 1984.

Dr. Igal Dotan is a philosopher and historian of Science.

The exhibition is a collaboration with the Association for Civil Rights in Israel and their Program for International Humanitarian Law.
Rod Dickinson’s visit Supported by BI ARTS (British Israeli arts training scheme), an initiative of the British Council, Ministry of Foreign

iThere are no comments