This night is the start of a programme of videos and lectures with presentations by both local and international artists and activists. This programme is composed by the guest curator Galit Eilat, director of the Israeli Center for Digital Art, in close collaboration with the artists of Chto Delat.

On Thursday 3 December at 19.00 a film programme will be screened in the Activist Club by Chto Delat, from B2.06 on the second floor of the Nieuwbouw (New building). 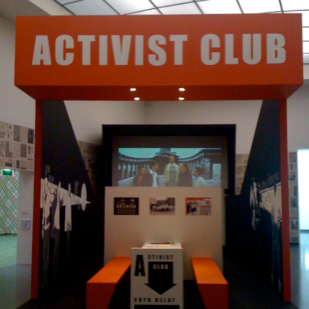 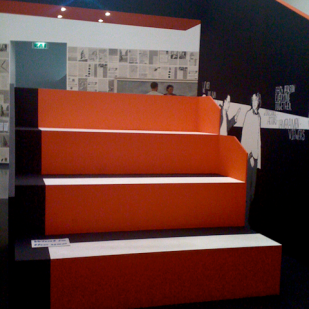 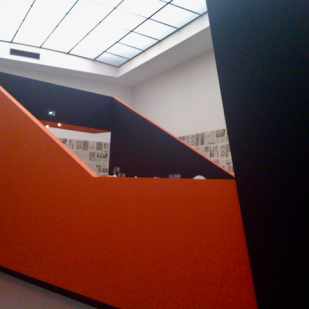 The video works in the Re-Constructions screening program deal with the construction of consciousness in Israeli architectural and textual space, where the violent notion of “burning into the consciousness” (a term that was introduced during the second intifada describing the purpose of the Israeli Army actions against the Palestinians as a process of burning their consciousness so that they will give up the idea of resisting the Israeli occupation) or “facts on the ground” that the Israeli politician use has entered Israeli media and public discourse, replacing expressions such as “building consciousness” or “constructing consciousness. ”Some of the video works chosen for this program deal with Re-Constructions of reality through simulation methods, methods shaping the reality of the present. In all the works, psychological borders are externalised in different degrees and made physical.

The following films will be screened on 3 December:

All films are from the archive of the Israeli Center for Digital Art.

The Activist Club (2007 – 2009) by Chto Delat, a collective of artists, critics, philosophers and writers from St. Petersburg and Moscow, is part of the exhibition Rien ne va Plus, in the first part of Play Van Abbe. Rien ne va plus displays a number of installations and projects from the museum’s collection during the period 1966 up to the present, by artists who tackle social issues in an explicit dialogue with the museum context. The emphasis is on the story of the artists who involve the visitor in their ‘game’.

In the Activist Club Chto Delat is concerned with topics in the field of tension between art, political theory and activism. They designed a small cinema with a study and discussion area and use the museum as a public place in order to initiate a discussion about the position of art in our society.

This lecture (29.07.2010) is part of the accompanying film program for the Activist Club.
Three films dealing with art theft were made in Soviet Union in 1970. Granddad’s-Robbers by Eldar Ryazanov (produced by Mosfilm) dealt with a theft of a Rembrandt painting from a museum that was arranged by an elderly Soviet police detective in order to solve the case successfully and avoid retirement. Simultaneously, Moldova-Film (a filmstudio based in Chisinau, Romania) released Theft, a detective about an art collector falsely accused of selling a unique Russian icon to a London gallery. Finally, in that same year The Return of Saint Lucas was completed. The latter film was based on a true story.

In February 1965 Evangelist Lucas by France Hals was stolen from a temporary exhibition at Pushkin Museum in Moscow. This was a first major case of art theft in Soviet Union. Curiously enough, weeks before this theft Yekaterina Furtseva, Soviet minister of culture at that time, famously stated that in USSR, unlike in the West, works of art were not being stolen. The disappearance of Evangelist Lucas was kept secret, and the investigation of this case was put under special control. In 1966 the painting was found. The case was silenced in the media, however, the film The Return of Saint Lucas was produced. The film didn’t stick to the details of a real story, but its key components (a painting that was stolen and a museum where it happened) were literally reproduced. As a result of a case of Evangelist Lucas, the motif of art theft (that was only recently dismissed as non-existent in Soviet society) was legitimized as a part of detective genre. Art theft, a topic that was absent from Soviet popular culture prior to 1970s, was in a manifold way introduced into a Soviet detective film. The Soviet art theft films represent the emergence of an art market in a society that tended to outlaw economic operations with the artworks, reducing them to a mere symbolic value of museum objects.

Oleksiy Radynsky (Kiev/Ukraine) is a scholar of art and film theory with an interest in Soviet montage and research-based art practices. Author of studies based on the art of Dziga Vertov (Soviet pioneer in documentaryfilm and film theorist), Boris Mikhailov (one of the most important and still active fine art photographers from the former USSR) and Kira Muratova (director, scriptwriter and actress with a large Soviet and Russian oeuvre).